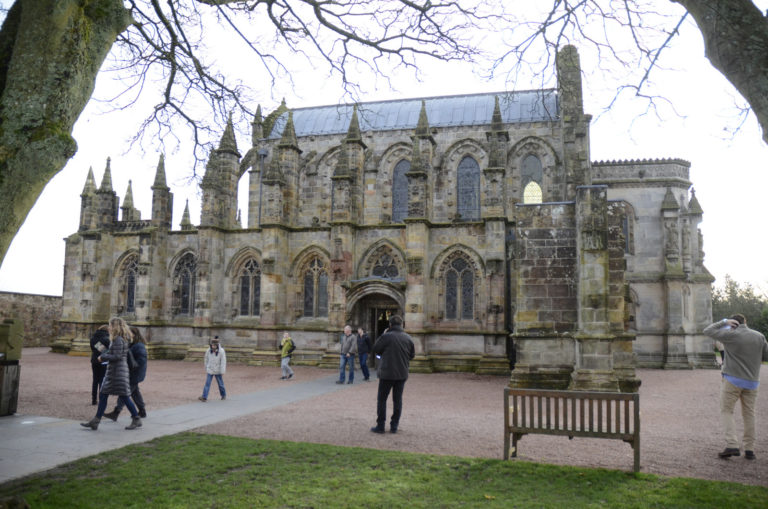 Rosslyn Chapel welcomed a record-breaking number of visitors in 2017, with just over 181,700 paying visitors during the year. The previous record was set in 2006, following the release of The Da Vinci Code film, when the Chapel had 175,074 visitors. The figures for 2017 represent an increase of 13% on 2016.

‘It is wonderful to have welcomed a record number of visitors in 2017. As a charity, Rosslyn Chapel Trust depends on income from visitors, donation and legacies, to conserve the Chapel for future generations to appreciate, and so each visitor makes a valuable contribution to help us continue this work.

Annual passholders and children in family groups do not pay for admission and so when those numbers are added, we welcomed the remarkable number of over 196,000 visitors in total in 2017. Visitors come from far and wide and it’s great that historic buildings, such as the Chapel, continue to hold such strong appeal.

2017 was generally a very good year for the Chapel, as its status as a 5-star attraction was confirmed by VisitScotland and it was the only attraction in Lothians to be shortlisted for two awards in the regional finals of the Scottish Thistle Awards.

These achievements are great recognition for all the team here who work hard to provide one of the best visitor experiences in Scotland.’

Rosslyn Chapel was founded in 1446 by Sir William St Clair and, although it took forty years to build, was incomplete at the time of his death in 1484. The beauty of its setting and its ornate medieval stonework have inspired, attracted and intrigued visitors and artists for generations.

The Chapel came to worldwide prominence in 2003 when it featured in Dan Brown’s best-selling novel, The Da Vinci Code, and the subsequent film released in 2006. Visitor numbers rose dramatically at that time.

Rosslyn Chapel Trust was established in 1995 to manage the conservation and public opening of the Midlothian Chapel. In that first year, the Chapel welcomed just under 10,000 visitors.

The Chapel continues to be a working church, within the Scottish Episcopal Church’s Diocese of Edinburgh. It is open to visitors throughout the year.